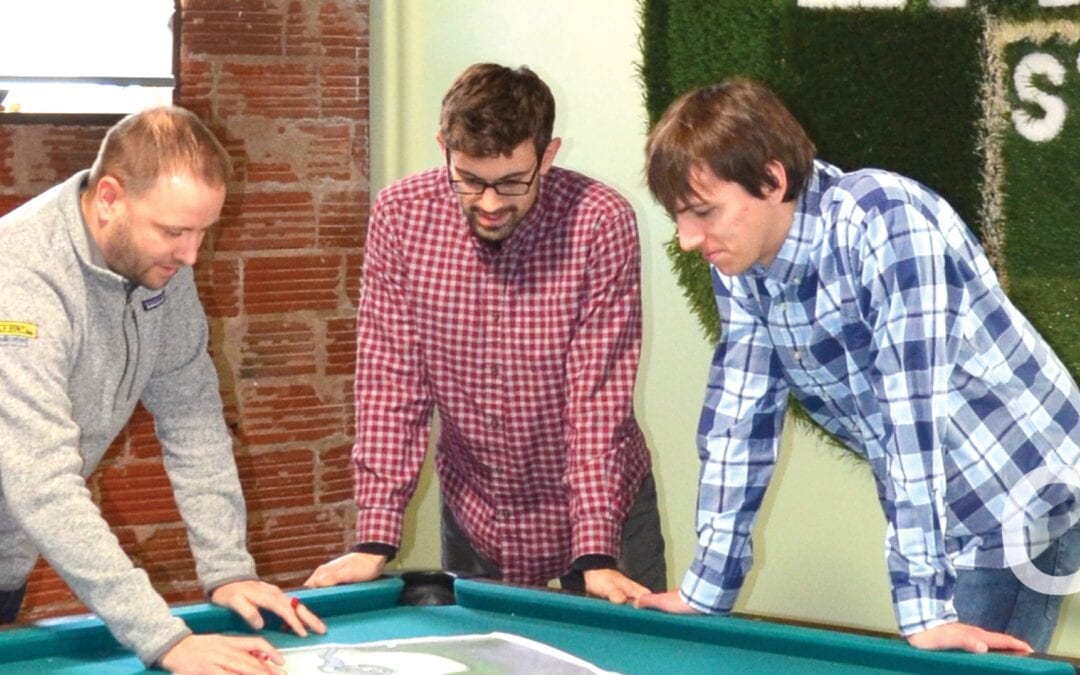 Land3 Studio might be the quietest, creative-functioning firm in downtown Lee’s Summit. In business a solid decade now, co-founder Bob Bushyhead said that’s kind of the nature of the business.

Unassuming. Methodical. Creative. The team of six that make up the Land3 office at 317 SE Main Street in downtown Lee’s Summit have varied and diverse backgrounds, educations and experiences. And they have come together to be a part of some of the largest projects in Kansas City and the Midwest.

Originally founded in 2007 by Jeff Bruce, Richard Yates (since retired) and Bushyhead, Land3 Studio was formed to tackle landscape architecture in and around Kansas City ““ an area that, at that time, was not a very mature market.

“We saw an opportunity to bring those ideas and practices that we experienced nationally here,” Bushyhead said. “Green roofs, sports fields, sustainability as a practice.”
Bushyhead was working for Bruce in 2006 when the idea was born. Bruce had been in practice since the mid-70s and Bob in practice since the mid-80s, so each had an extensive baseline of understanding who the players were in the area.

Starting Land3 Studio ““ in hindsight ““ was predicated on two major factors: they began business before the sharp economic downturn of 2008 and the firm landed on the team for an early project that thrust them into motion. Working on the Schlitterbahn water park in Kansas City, Kansas was a great jump start.

“My grannie used to ask me, “˜With all this rain, are you getting much work?’ But we’re not planting the trees, we’re designing them.”

The “ragtag” bunch, though, is a serious one when it comes to landing projects in Healthcare, Government/Military, Sports Facilities, Green Roof, Parks & Recreation, Mixed-Use Development and Streetscape/Urban, Low-Impact Development. They’ve put an emphasis on teamwork and team ownership and have announced Roth will be an incoming partner in the firm in the beginning of 2018.

“It’s a positive next step for me,” Roth said. “The real opportunity is to continue to grow the firm. Grow the business, not just with numbers, but the projects out there and the quality of projects and the variety of projects we work on.”

Growth has been a staple of Land3, with project size doubling over 10 years, approaching 300 projects, $7 million in design fees and $100 million in built work. “The period after the downturn, there was very little development work. Almost all institutional ““ government, schools,” Bushyhead said. “Our focus is really on a client base within 150 miles of Kansas City. We do work around the country, but those clients are here.”Â Roth said the relationship building is what helps build and maintain the business, too.

“We get most of our work from relationships we already have,” he said. “A lot of work we’re doing now, we’re not coming in at the end, we’re in at the beginning to develop properties, develop space.”

Both say the large-scale sports complexes and parks are the most enjoyable projects. Land3 has its named attached to irrigation, entry plaza and planting and grading work
at Arrowhead Stadium, Kauffman Stadium and Children’s Mercy Park.

In the next decade, Land3 will continue to focus on the 3 Es of its business ““ environmental, economic and experience. “A lot of developers have new products developers are trying to put out. Agri-hood ““ that has origins in major metro areas on the coasts. Neighborhoods with a thematic landscape that is based around agriculture. Community gardens and orchards,” Roth said. “You’re seeing the surfacing of the millennials’ values into the values they want projected into the places they want to live in. Fewer personal amenities, more community.”

And continuing to build on the team concept will be vital for the firm.
“Our team structure and business structures allow us to be very adaptive, horizontal,” Bushyhead said. “Everybody does a little of everything.”

“We’ve created a studio environment. You can’t come here and hide and do an 8-5, it just won’t work.” Roth said the firm is part of the conversation in Kansas City,
and that was the goal.

“It’s not what you accomplish as a company, it’s what happens along the way,” he said. “When you think of landscape architecture in KC and in the Midwest, we want our name to be at the top. I enjoy being a part of the relationships we are building, with clients, with our partners, creating valuable projects that people can actually experience.”

For Bushyhead, creating an office in downtown Lee’s Summit for Land3 in 2015 was a coming home, of sorts. The office building brought in 14 new employees and shares space with a law firm he’s familiar with, Bushyhead, LLC, and Fossil Forge Design.

Bob and his wife, Christine, recently built a house with their son, Parker, in downtown Lee’s Summit. The homecoming, complete, as each can literally walk to work.

“I’ve commuted for 25 years, which is a long time,” he said. “Knowing people downtown, walking around downtown, it’s not always all about work.”