Today, the Downtown Lee’s Summit Farmers Market has grown into a regional attraction, drawing farmers and thousands of customers from all over Jackson County, Lafayette County, Cass County and beyond. For the last seven seasons, the Market has reached capacity for vendor spaces for the Saturday Market. A majority of growers and producers come from within a 30-minute drive of the market, but some travel as far away as Sedalia.

The Downtown Lee’s Summit Farmers Market has the longest season of any unenclosed market in the region: open from 7 a.m. to sell-out every Wednesday and Saturday from the first Saturday in April and runs through the last Saturday in November.

Demand continues to grow each year because of families who aim to eat healthier and want the opportunity to purchase fresh foods that have been grown locally. Many individuals also have a strong desire to support local farmers and local economies, as does the Downtown Lee’s Summit Main Street organization, which operates the Market.

Downtown Lee’s Summit Main Street has high standards for its Farmers Market, as is evident in its enforcement of Market Rules & Regulations. Some of the rules that help ensure consumer satisfaction and fairness for the farmers include the provision that only products grown in Missouri or within 150 miles of Lee’s Summit are allowed at the Market, and commercial vendors are prohibited. The Market also has an 80/20 rule, meaning non-farmers, such as bakers and crafters, can only make up 20 percent of the Market at any given time; the rest of the vendors must sell produce, meats, eggs and/or plants.

The Market has grown into much more than just an outlet for local foods. It has become a social gathering place for neighbors and features live entertainment, cultural activities and free children’s activities at various times throughout the season. Downtown Lee’s Summit Main Street hosts special events specifically at the Farmers Market, including the Spring Celebration, Harvest Fest, Christmas in July, and the Farmers Market Holiday Mart.

As Downtown Lee’s Summit Main Street looks toward the future of the Market, a new home is needed. The Market has outgrown the parking lot at 2nd and Douglas and lacks basic amenities such as water, electricity and restrooms.

In partnership with the City of Lee’s Summit and the Downtown Lee’s Summit Community Improvement District, Downtown Lee’s Summit Main Street has proposed the development of a new cultural arts outdoor performance space. The vision for this space includes an events pavilion that would facilitate new growth and opportunities at the Market and allow for more healthy living initiatives such as cooking demonstrations, yoga classes and fresh foods prepared on site. The new cultural arts outdoor performance space would also create a new front door for City Hall and a new home for dozens of community events and activities. 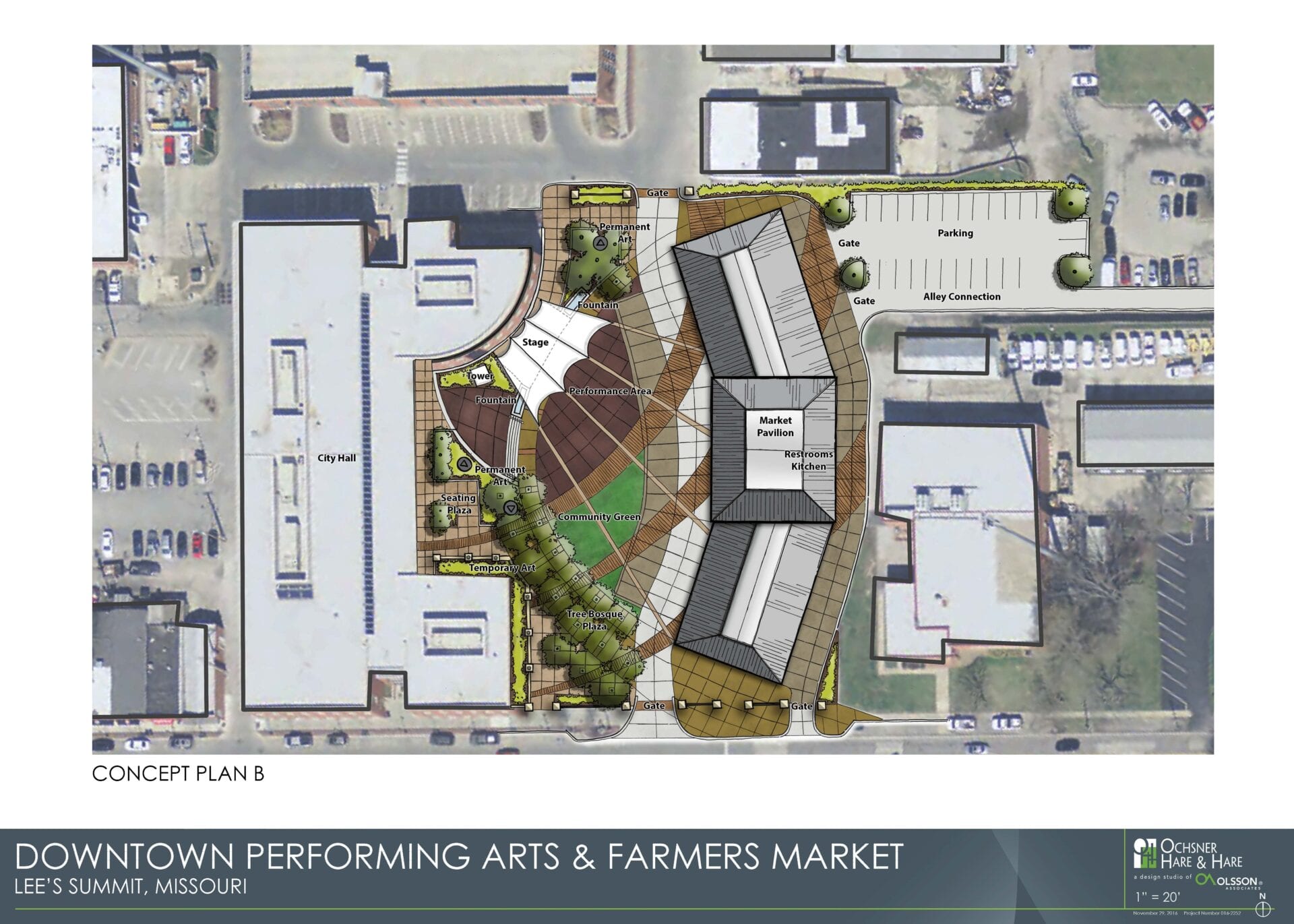