Horses, Monkeys, and Tarantulas…Oh My!

There are less than 2,000 people in the City of Lee’s Summit and farmers and livestock likely outnumber the citizens. Between Jackson and Cass County, there are 400 dairies and a dire need for trained and educated veterinarians.

By 1956, Lee’s Summit Animal Clinic had been open for eight years and Hertzog was fresh out of the University of Missouri’s prestigious veterinary program. The building was just a few rooms back in the 1940’s and 50’s. A handful of employees working in a profession that was about to boom into a multi-generational business.

“Sixty-three years later, here I am, right in the same location,” said Dr. Hertzog from his office on Market Street, surrounded by decades upon decades of memorabilia, awards, newspaper clippings and a mountain of evidence that Bud may just be the biggest Mizzou fan in Jackson County.

“Now, we’re running out of space. When I started here, this was just a farming community with 2,000 people, there were 400 dairies in Jackson and northern Cass counties. And now not a dairy left in Jackson County. Back in those days, farmers had 80 acres and some cows and that’s how they made a living.”

One of the original members of the Lee’s Summit Chamber of Commerce, Lee’s Summit Animal Clinic has grown to over 40 employees with 10 vets on staff in a building that is bursting at the seams (and another three vets at a second clinic on Commerce Drive). Still, the dogs, cats, and, yes, monkeys, wait patiently in the lobby for their turn to be seen by the doctors.

Hertzog recalls the time when he began his career and the country had a critical need for veterinarians –  coming out of the very few programs nationwide – to be on the job. Military service never came calling and Dr. Hertzog put his skills to work locally. His bachelor’s degree in animal science in hand, Hertzog was one of only 30 in his class from a program that was still in its infancy in Columbia.

Born on a farm in Lee’s Summit in 1931, one of six children, Bud said he always knew he was going to work with animals. “My folks were hard-working people,” Bud recalled. “Those were the Depression days. A dollar was about the going wage for a day’s work. I remember those guys on Longview Farm working for a dollar a day.”

Bud attended Cedar Hill School, a country school, and graduated from Lee’s Summit High School in 1948 with just 43 in his graduating class. “Kids grow up on the farm, and I thought everybody got up at 4:30 in the morning and worked until after dark,” Bud said, his signature smile
creeping over his face. “I didn’t know there was another life. My folks taught me the balance of life and work ethic.” 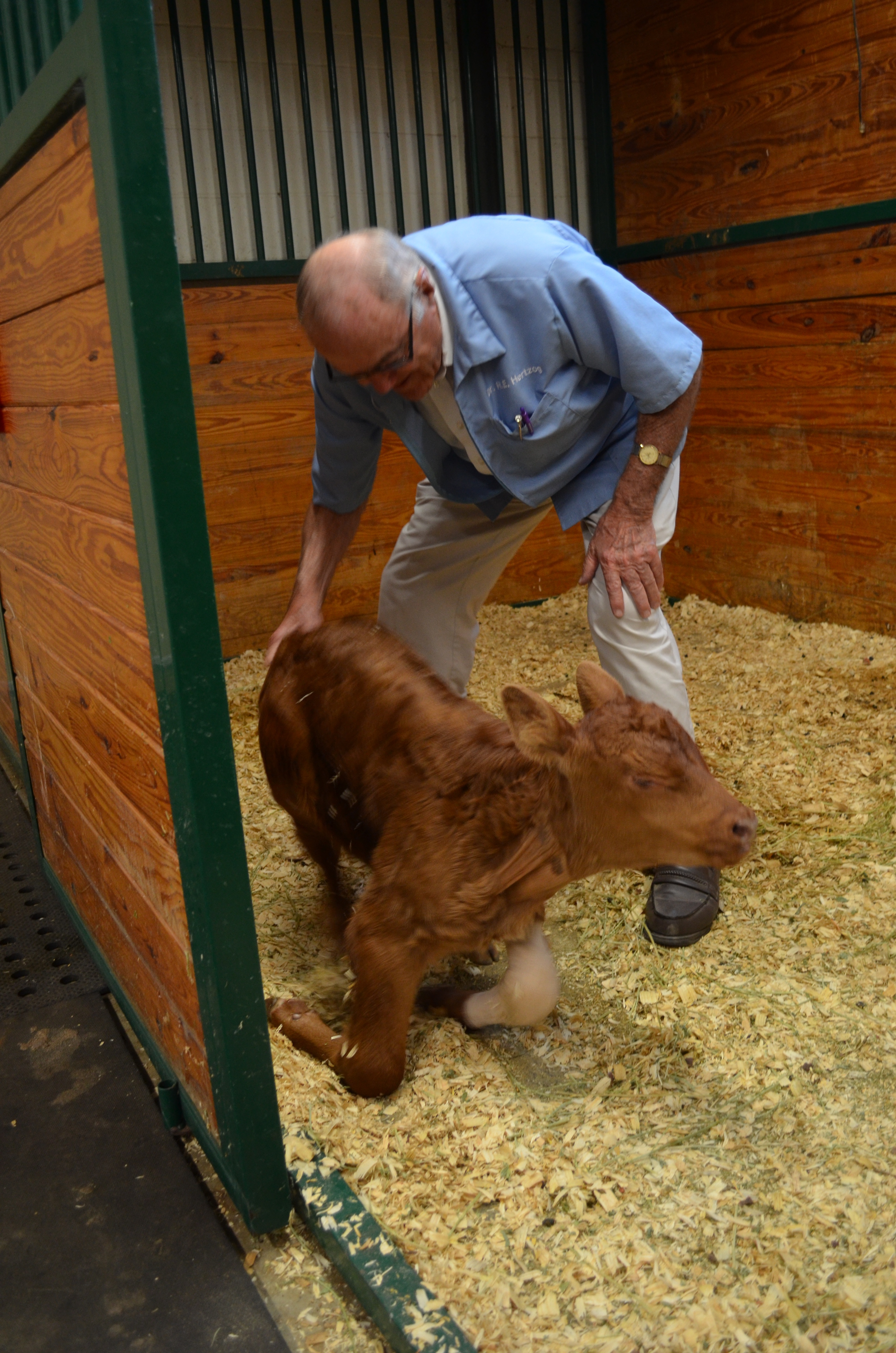 The Hertzogs were dairy farmers and for the first number of years of his practice, Bud would find himself on a dairy farm often testing the cows. The long and often arduous labor of the time sends Hertzog directly to fond memories of his wife of 67 years, Betty. “My wife, bless her heart, it had to be a trying life. We had 5 kids. But we made it through,” he said. Now with 10 grandkids and 11 great-grandkids, Bud knew he would surely have another Hertzog in the building. Their son David graduated from Missouri and has been with the practice since 1991.

“When he was finishing up with vet school, we thought maybe it would be better to work somewhere else, but we needed help and it ended up working out well,” Bud said, walking around his clinic and taking time to listen in to David talking to a patient and her dog in an exam room. Cattle and horses and sheep and hogs can be found on almost every farm, so Dr. Hertzog’s clinic soon became known for medical care that spanned the animal world. At one point, the Kansas City Zoo came looking for a vet, so those duties went to the clinic as well. “I used to go to the zoo nearly every day or they would transport animals out here for care,” he said.

“Humbling experience, that was. I got out of school, one of the first calls I got was from the zoo to come look at a turtle. I have been used to snapping turtles, so I thought that could not be too difficult.” The first turtle was a Galapagos and he was over 200 pounds. “He was so big, I couldn’t even hear his heartbeat with a stethoscope,” Bud recalled. “He had pneumonia, but he turned out OK. Hey, that was 61 or more years ago and that rascal is still in the zoo today.”

In his line of work, Hertzog and his team could be treating a calf, snake and gorilla all in the same day. “We had three tortoises this morning,” he said with a laugh. “We see everything from humming birds to elephants in this practice. We had a pet tarantula come in a while back with a broken leg and we amputated it. All better.”

Bud and his team did work for the American Royal as the lead vet team for more than 50 years. “Every weekend and sometimes most of the week, we spent a lot of time down there and a lot of good memories of the American Royal,” he said. Hertzog has been at the practice so long, he’s seen second and third generations of patients and cared for family pets from father to son to grandson. “It always brings back good memories,” he said, adding that technology isn’t the only thing that’s massively changed in his time. “Awareness of pets, certainly. In the old days, people would spend a little money on a dog. But animals are living longer now with special diets and other things. People never cease to amaze me what they will do for their animals. And I think that’s great.”

Dr. Hertzog served on the Lee’s Summit Chamber Board for two terms. He’s also seen time in elected office with the Jackson County Legislature and Lee’s Summit R-7 School Board. “Being a part of the community and being able to participate with others and seeing the community grow, gives us a great sense of pride,” he said. “Not too many communities with the private-public cooperation that we have here with our Chamber, our EDC and others. We have great faith in the future of our Chamber and are big supporters of our Chamber.”