The Air Race Classic (ARC) traces its roots to the 1929 Women’s Air Derby, in which Amelia Earhart and 19 other daring female pilots raced from Santa Monica, California, to Cleveland, Ohio. That contest, aka the Powder Puff Derby, marked the beginning of women’s air racing in the United States.

Today, the ARC is the epicenter of women’s air racing, the ultimate test of aeronautical ability and decision-making for female pilots of all ages and from all walks of life. The ongoing purpose is to encourage and promote women in aviation. 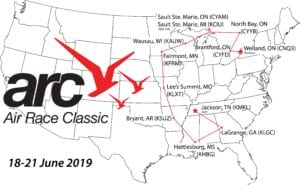 The theme of the 43rd annual race is “North of the Border, Let’s Fly Canada.” This year’s race starts in the U.S as usual but crosses into Canada for fuel and overnight stops in Ontario at Sault Ste. Marie, then to North Bay, to Brantford, to the final leg and finish line in Welland. The annual race follows a different route every year and will include Lee’s Summit as a central point along the path this year.

John Ohrazda, Lee’s Summit Airport Manager, wants to warn everyone that June 18-20 will have heavy air traffic overhead. Nothing to worry about, just look up and see the air racers flying over.

Racers will start at 8 a.m. on Tuesday, June 18 from Jackson, Tennessee where small airplanes will launch full throttle, 30 seconds apart, down the runway. From there, they will embark on a course that will take them more than 2,500 miles to Welland, Ontario in just four days.

The race route is chosen to present challenges to the racers, provide a variety of learning opportunities, yet be within the endurance range of the slowest airplanes. Teams will face unfamiliar terrain and challenging weather as they put their piloting skills to the test, flying at maximum speed across 13 states.

The race ends at the Welland-Pelham airport known as the Dorothy Rungeling Airport, an appropriate choice as she was among the few Canadian woman to gain a pilot’s license, and the first woman to fly solo in a helicopter, a first female city councilor, in the region and a governor of the Flying 99’s female flying club.

Each team is made up of female duos and trios from all around the globe, with a large variety of them representing different universities. The 2018 race consisted of 55 teams, with 119 racers from 34 states and 5 foreign countries. About 100 pilots are expected to take part.

Open to all female pilot teams, the race is for fixed-wing aircraft from 100 to 570 horsepower. Each plane is given a handicap for the model, and pilots race against their handicap of theoretical best speed for the particular plane. The route changes each year to vary the terrain and conditions over theÂ  approximately 2,400 statute miles, and legs of 280 to 320 statute miles with 8 or 9 timing points.

Pilots range in age from 17 to 90 years old. They come from a wide variety of backgrounds including students, teachers, doctors, airline pilots, business owners, professionals and air traffic controllers. Race Teams, consisting of at least two women pilots, must fly VFR (Visual Flight Rules) during daylight hours only and are given four days to make flybys at each en route timing point and then land at the terminus. Some are flying the ARC for the first time, while others have dozens of races in their logbooks.

Each race plane carries a team of two or three women: pilot, copilot and an optional teammate. Of the 55 teams in this year’s race, 22 are representing colleges or universities. On two of the teams, mothers and daughters are racing together.

How long it will take each team to finish the race depends on the weather, the pilot’s strategy and the speed of the airplane. The fastest planes may complete the course in two days, while the slowest aircraft may take all four days. But because the ARC is a handicap race, teams are racing against their own best time, not against one another. This allows slower planes to compete against faster aircraft on an equal basis.

Pilots may try to pre-select their stopping points, although in some cases the weather or airplane may choose for them. The route has the flyby timing location at one airport, while they stop for fuel, refreshments and possible overnight stay is at another larger airport nearby.

During the race, the website home page will be revised so that everyone can follow the racers as they make their way along the race course. You will be able to see where your favorite team is, and where they decide to spend the night. But you will always be able to see the route map and check out information for stops along the route.

Official standings aren’t determined until after the last team has crossed the finish line ““ the last arrival at the terminus may, in fact, be the winner. ARC fans can follow the racers’ progress on airraceclassic.org.