Don Kahan’s Half Century of Selling Cars, Giving Back 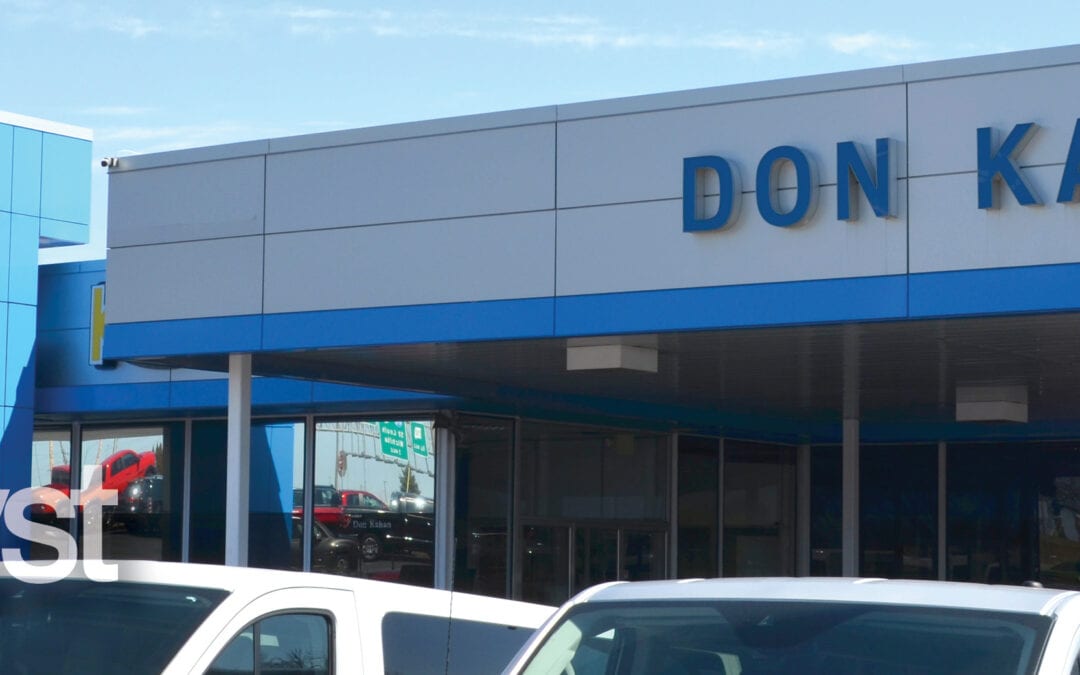 Don Kahan has said that his “location became my vocation.” That’s because the 50-plus-year resident and auto expert has literally lived over his dealership since the 1970s, just a few short years after moving to Lee’s Summit and opening up in 1965. Kahan was working at a dealership in Kansas City, Kansas, at the time, and with the death of local dealer Howard Willey, he was ready to branch out on his own in this bustling and growing KC suburb.

General Motors was looking to move the dealership out of downtown Lee’s Summit and closer to highway access, and Kahan got the nod in 1970, moving from 220 SE Douglas Street to the new building he constructed off Blue Parkway.
Since then, the 89-year-old Kahan has nearly seen it all in the auto business: from his opening to his “divorce” from GM and Chevrolet, to selling vehicles powered by natural gas.

The community leader is an ever-changing and evolving one in business. And he’s OK with it, still. “We’re now partners with Alkane Truck Company. They make city delivery and over-the-road tractors, and we’ve been at this for about three years,” Kahan said. “These vehicles are powered by natural gas, compressed gas, propane, just about anything you can think of.”

His dealership also recently completed construction of a 70-foot truck paint booth that’s the largest in Kansas City. “There’s a market there for that and we will paint trucks, boats, just about anything in there.”
Kahan is also renting space on his large lot to Pat Herrington, who’s selling cars, Wild Woody’s (they rent and sell vans and cars) and a dealer that sells handicap-accessible vans.

So, Lee’s Summit has been home for almost 55 years to Kahan and his wide array of car ventures. How long can he be at it? “I will do it until I drop,” he said, that familiar laugh following his comment On top of being an auto innovator and leader, Kahan’s footprint from a community and philanthropic side can be found all over Lee’s Summit.

City council, chamber of commerce, economic development, Lee’s Summit CARES – you name it, he’s been a part of it. Kahan first ran for mayor and lost to Bill McKee in 1976. He was later elected to the city council. He said being on council and running a major business in town proved difficult. “As a matter of fact, we put in a bid on the police cars, and we won the bid, but I had to back off of it because I was on the council. I thought, boy, this is costing me business,” he recalls.

As far back as 1972, Kahan was named chair of the board for the Lee’s Summit Chamber of Commerce – a position he held on two separate occasions. He was one of three businessmen who started the Lee’s Summit Economic Development Council back in 1984-85. “We felt that Lee’s Summit’s time has come,” he said. “We talked to a gal at Jackson County and picked her brain and she was able to help us get started. We wanted to promote commerce for Lee’s Summit, bring in more businesses and people here.”

He’s sat on the board of directors for Boatman’s Bank, Truman Medical Center, and currently for Lee’s Summit Social Services. He was one of many that helped form Lee’s Summit CARES as well.

Kahan has been given the Ethics in Business award and the Lifetime Achievement Award. In other words, Kahan is deeply a part of Lee’s Summit’s growing past and vibrant future. “Lee’s Summit was in the right place at the right time, then,” Kahan noted.

And of course, it could be said, that Don Kahan came to Lee’s Summit at just the right time as well.